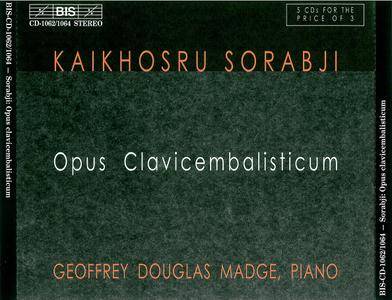 A work with a name like this can only be unusual. The opus in question is a three-part solo piano epic, lasting a shade under four hours and of a complexity to match. Combine an all-night raga sequence with Bach's Art of Fugue and you're getting close. Is it worth the listen? Yes, if you want to give your heart and mind–not just your brain–a real workout. For all his outsize demands, Sorabji was a front-rank pianist, who understood technique as a physical end to spiritual means. There are stretches of manic complexity here, but also passages of real poetry: try the lengthy "Interludium primum" which opens Part 2, or many of the 81(!) variations which follow the magisterial "Passacaglia" in Part 3. It's music which cries out for transcendental virtuosity, and Geoffrey Douglas Madge gives it just that. He gave four performances over six years and this Chicago one from 1983 assumed mythic status among those who heard it. Remastered for CD release, it is awe-inspiring in its grasp of what's gone into this music: the audience clearly living it with the pianist every step of the way. Hear it for yourself, then why not run the marathon or climb Everest for relaxation?